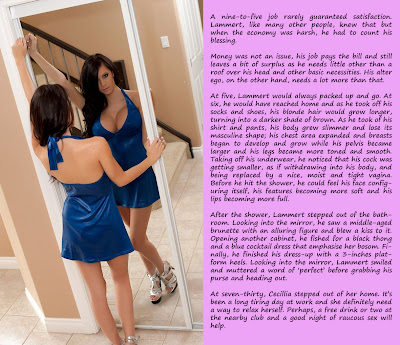 A nine-to-five job rarely guaranteed satisfaction. Lammert, like many other people, knew that but when the economy was harsh, he had to count his blessing.
Money was not an issue, his job pays the bill and still leaves a bit of surplus as he needs little other than a roof over his head and other basic necessities. His alter ego, on the other hand, needs a lot more than that.
At five, Lammert would always packed up and go. At six, he would have reached home and as he took off his socks and shoes, his blonde hair would grow longer, turning into a darker shade of brown. As he took of his shirt and pants, his body grew slimmer and lose its masculine shape; his chest area expanded and breasts began to develop and grow while his pelvis became larger and his legs became more toned and smooth. Taking off his underwear, he noticed that his cock was getting smaller, as if withdrawing into his body, and being replaced by a nice, moist and tight vagina. Before he hit the shower, he could feel his face configuring itself, his features becoming more soft and his lips becoming more full.
After the shower, Lammert stepped out of the bathroom. Looking into the mirror, he saw a middle-aged brunette with an alluring figure and blew a kiss to it. Opening another cabinet, he fished for a black thong and a blue cocktail dress that emphasise her bosom. Finally, he finished his dress-up with a 3-inches platform heels. Looking into the mirror, Lammert smiled and muttered a word of ‘perfect’ before grabbing his purse and heading out.
At seven-thirty, Cecillia stepped out of her home. It’s been a long tiring day at work and she definitely need a way to relax herself. Perhaps, a free drink or two at the nearby club and a good night of raucous sex will help.